Call to the Hall: 2019 Hall of Fame Class revealed 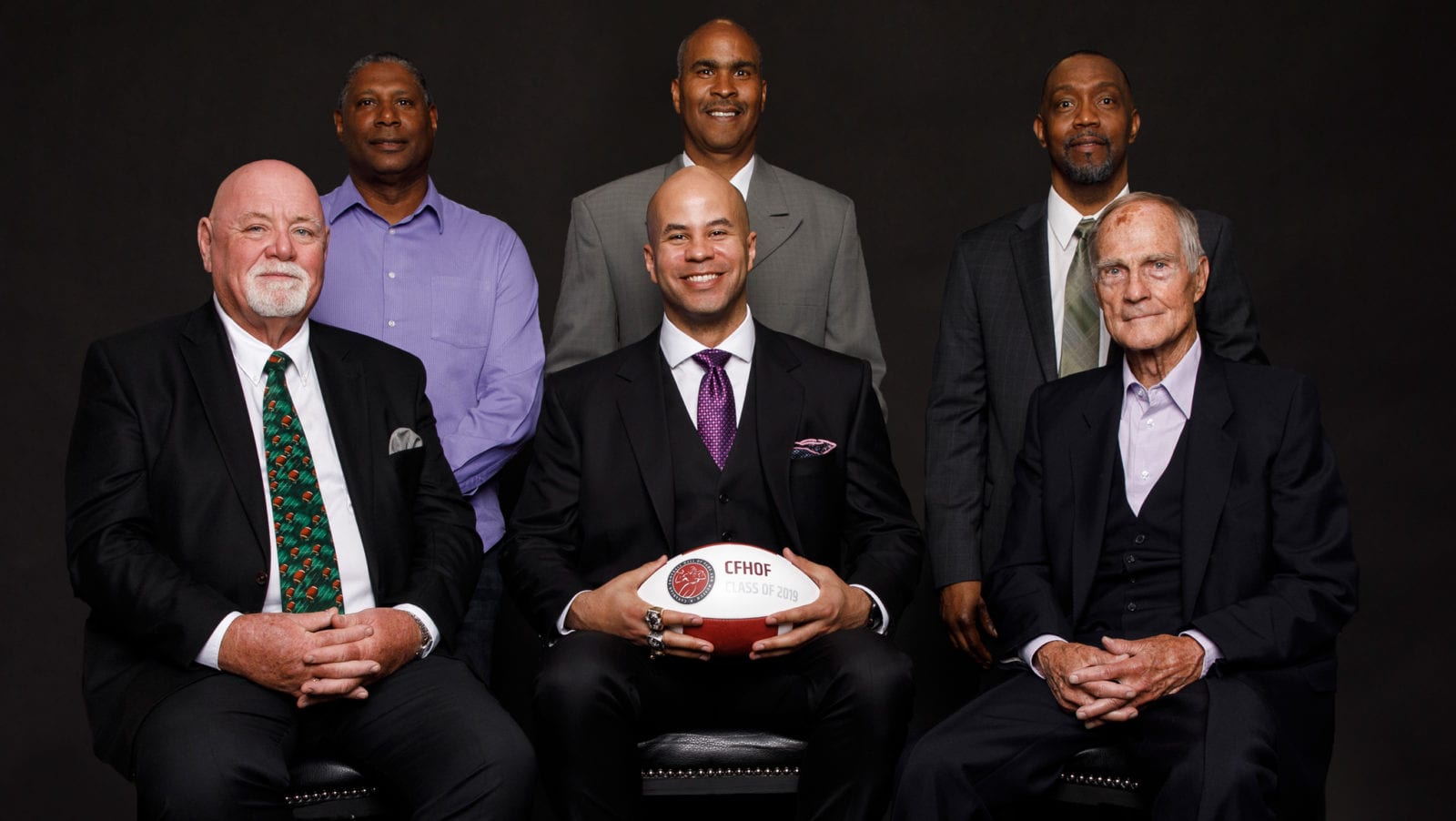 TORONTO — The Canadian Football Hall of Fame (CFHOF) and Museum’s stellar Class of 2019 features one of the Canadian Football League’s (CFL) top Canadian running backs, three receivers who were dominant in relatively short CFL careers, a player who excelled at two positions, a transformative figure in Saskatchewan football and a legendary university coach from British Columbia.

“Every class is special and this one is no different,” said Mark DeNobile, Executive Director of the Canadian Football Hall of Fame and Museum, as he officially announced the names of this year’s inductees at an event in Toronto.

Formal induction ceremonies for this year’s CFHOF class will be held later this year at the Hall of Fame in Hamilton on Friday, August 9. The Hall of Fame game is at Tim Hortons Field on Saturday August 10th when the Tiger-Cats host the BC Lions. Here’s a closer look at the 2019 Canadian Football Hall Inductees:

Jon Cornish played with the Calgary Stampeders from 2007 to 2015, winning the Grey Cup in 2008 and 2014. Cornish was recognized as the CFL’s Most Outstanding Player in 2013 and won three consecutive Most Outstanding Canadian Awards from 2012 to 2014. Cornish was also a finalist for the Most Outstanding Player Award in 2012. He was selected as a Western All-Star for four straight seasons from 2011 to 2014, a CFL All-Star three straight years from 2012 to 2014 and led the CFL in rushing in 2012, 2013 and 2014. Cornish received the Lou Marsh Award in 2013 as Canada’s Male Athlete of the Year.  Cornish finished his career as the fourth-leading rusher in Stampeders history with 6,844 yards, on 1,026 carries, an average of 6.7 yards per carry, and 44 touchdowns along with 1,666 receiving yards and nine touchdowns and 8,510 total yards from scrimmage.

Swervin’ Mervyn Fernandez made an impact in his first season in Vancouver and was named the 1982 Western Rookie of the Year. Fernandez spent all six seasons of his CFL career with the BC Lions, playing from 1982 to 1986, before returning for the 1994 season after playing in the National Football League. Fernandez became the first Lion to win the CFL’s Most Outstanding Player Award in 1985, when he had 95 catches and 1,727 yards for an 18.2 yards per reception average, along with 15 touchdowns. He was recognized as a CFL All-Star in 1984 and 1985, was a Western All-Star four straight seasons from 1982 to 1985 (with 1,000 yards receiving each year) and won Grey Cups with the Lions in 1985 and 1994. He made the most of his six seasons in BC, recording regular season career totals of 399 receptions, 6,690 receiving yards, an average of 16.8 yards per catch and 58 touchdown catches.

Terry Greer spent six seasons with the Toronto Argonauts from 1980 to 1985 and left his mark, becoming the first receiver in pro football to record 2,000 receiving yards in a season in 1983. Greer was recognized as a CFL All-Star in 1982 and 1983, and was selected as an Eastern All-Star for four consecutive seasons from 1982 to 1985 (with 1,000 yards receiving each year). He played on the Argonauts’ Grey Cup-winning team in 1983, which gave the team’s long-suffering fans their first championship since 1952. The Argonauts also played in the 1982 Grey Cup, losing to the Edmonton Eskimos. He left the CFL with 404 receptions for 6,817 yards, an average of 16.8 yards per catch and 47 touchdown catches. Greer averaged 1,136 receiving yards per season in his six CFL seasons, which is sixth all-time. He was the Most Outstanding Player in the Eastern Division in 1983.

Jim Hopson began his CFL career on the field, playing offensive line for the Saskatchewan Roughriders from 1973 to 1976, and finished it building the foundation for the Roughriders to be a business success. Hopson served four years on the Roughriders’ Board of Directors as the team’s alumni representative. In 2004 he became the team’s first full-time President and Chief Executive Officer, and spent ten years in the position. During Hopson’s tenure, Saskatchewan appeared in four Grey Cups, winning in 2007 and 2013. When Hopson retired from the club in 2015, the Roughriders had entered into a partnership with the City of Regina and Province of Saskatchewan to build a new stadium, which opened in 2017.

Frank Smith had an outstanding coaching career at the University of British Columbia, spending 21 seasons at the helm from 1974 to 1994, winning two Vanier Cups and 126 games. Smith coached the Thunderbirds to five Hardy Cup Canada West conference titles in 1976, 1978, 1982, 1986 and 1987. UBC won the Vanier Cup in 1982 and 1986, and were finalists in 1978 and 1987. Smith won the Frank Tindall Award as Canadian Inter-university Athletic Union Football Coach of the Year in 1978 and 1987. He holds several UBC football coaching records including Most Seasons Coached (21), Most Victories (126), Most Consecutive Victories (22), and Most Points in One Season (466). A total of 47 players from Smith’s time as coach of the Thunderbirds went on to play in the Canadian Football League. Smith closed out the 1990’s by serving six seasons as an assistant coach with Saskatchewan and BC in the CFL.

“I would like to thank the Selection Committee for their commitment and dedication in selecting a truly deserving Canadian Football Hall of Fame class. The Hall recognizes the tremendous contributions made by Builders and Players at all levels of Football in Canada. We are very pleased to see significant representation of the history of Canadian football in the 2019 class,” said DeNobile.

“On behalf on the Canadian Football League, I want to congratulate each member who is a part of the 2019 class and thank them for the mark they have left in football in Canada,” said CFL Commissioner, Randy Ambrosie. “Their hard work, dedication and talent created incredible moments for fans and helped build the strong, exciting game we see today.”

The new inductees will bring the total number of Hall of Fame members to 303 in the Hall’s Zone of Champions, which features busts of each member of the Hall. The Hall relocated to Tim Hortons Field in Hamilton in 2018 and can be found online at www.cfhof.ca/.

The Canadian Football Hall of Fame and Museum operates as a non-profit registered charity. Located in Hamilton, Ontario since 1963, it is home to more than 80,000 Canadian football artefacts, ranging from equipment and trophies to photos and videos.

The Hall of Fame game is Saturday August 10, as the BC Lions play the Hamilton Tiger-Cats at Tim Hortons Field.