Hall of Fame Class of 2016 Announced 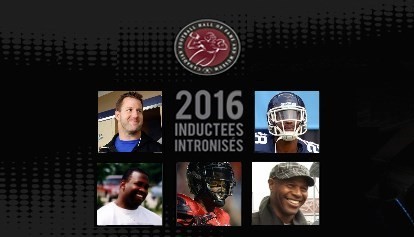 Friday, November 27, 2015 — WINNIPEG, MB – Coming off the heels of an exciting year of festivities and marquee events in 2015, The Canadian Football Hall of Fame and Museum (CFHOF) has officially announced the Induction Class for 2016 at a celebration event during the 103rd Grey Cup Festival in Winnipeg.

“It is my pleasure to announce the Induction Class of 2016,” said Mark DeNobile, Executive Director of the Canadian Football Hall of Fame and Museum. “The Inductees are Doug Brown, Rodney Harding, Derrell Mitchell and James West in the player category. In the Builder category, long time administrator of minor football in Saskatchewan and the Saskatoon Hilltops Don McDonald has been selected.”

Rodney Harding started his CFL career in 1985 with the Toronto Argonauts, a career that took him to the Memphis Mad Dogs and the Calgary Stampeders. He became a seven-time division All-Star, appearing in 201 regular season games and 11 play-off games. He is first among all Argonauts in career sacks, with 92. He ranks 9th in CFL history with 105 sacks. Named to the All-time Argo depth chart in 2007, Rodney went to two Grey Cup games, winning in 1991.

Derrell played for the Toronto Argonauts and the Edmonton Eskimos between 1997-2007, was a five-time east All-Star and three-time CFL All Star. He is 9th on the all-time receiving yards list with 12,014 and was CFL rookie of the year in 1997. He held many receiving records including most receptions in a season with 160 in 1998; six seasons with over 1,000 yards receiving; 47 career receiving games with 100 yards or more; and one career game of 200 yards receiving. Derrell appeared in two Grey Cup games, winning in 1997 and 2005.

James West played his entire CFL career with the Calgary Stampeders and the Winnipeg Blue Bombers. The three-time division All-Star and two-time CFL All-Star was a finalist for Most Outstanding Defensive Player in 1987. He is 5th all-time on the Blue Bomber tackle list with 400, had 55 career sacks and 21 interceptions. James played in three Grey Cup games, winning in 1988 and 1990.

“I would like to thank the Selection Committee for their commitment and dedication in selecting a truly excellent Canadian Football Hall of Fame class. This is the fourth class selected under the new terms of reference under which we recognize all levels of Football in Canada. We are very pleased to see significant representation in the 2016 class,” added DeNobile.

“On behalf of the CFL, our Board of Governors and our fans, congratulations to this year’s inductees on this great honour,” said CFL Commissioner Jeffrey L. Orridge. “Every one of these gentlemen had a positive impact on the growth of football in our country, and for that we are forever indebted to them. Thank you to the Canadian Football Hall of Fame and the Selection Committee for helping us all provide these worthy inductees with the recognition they deserve.”

Induction weekend details will be made available at a later date.

The new inductees will bring the total number of Hall of Fame members to 283 in the Hall’s Zone of Champions, which features busts of each member of the Hall, and will be relocated to Tim Hortons Field in 2016.

The Canadian Football Hall of Fame and Museum operates as a non-profit registered charity. Located in Hamilton, Ontario since 1963, it is home to more than 80,000 Canadian football artefacts, ranging from equipment and trophies to photos and videos.