W.T.H (Hap) first officiated football in the Ottawa High School League in 1929. He was referee-in-chief for the Ottawa and district high schools for 15 years and drafted many Rules which were later adopted by the professional leagues. He was also the commissioner of the Interprovincial Junior Football League from 1952 to 1956.

Shouldice began officiating at the senior level in 1935 when he joined the Big Four staff. During his career he refereed nine Grey Cup games and retired from on-field duties in 1956. He was the Eastern Conference supervisor of officials from 1958 until he became the Canadian Football League’s first Director of Officiating in 1972. He held this position until 1978.

Hap Shouldice was presented with a plaque at the 1967 Grey Cup Dinner. He is a member of the Ottawa Sports Hall of Fame. 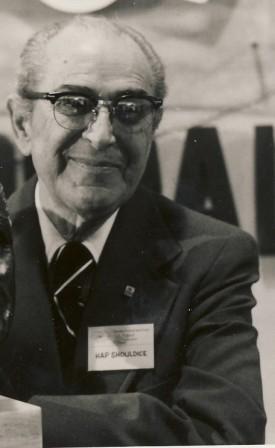