Uzooma Okeke joined the Canadian Football League when he signed for the now defunct Shreveport Pirates in 1994. During his two seasons with the Pirates, Okeke played a total of 34 games.

After Shreveport folded along with the other United States teams, Okeke signed with the Ottawa Rough Riders in 1996. In the 1996 Dispersal Draft Okeke was picked up by the Montreal Alouettes, where he spent the remainder of his career.

During his 10 seasons with the Alouettes, Okeke was a mainstay on the Offensive Line. In total, Okeke played 163 regular season games with Montreal. During his time with the Alouettes, Okeke is a seven-time Eastern All-Star Offensive Tackle, seven-time All-Canadian Offensive Tackle, and won the CFL Most Outstanding Lineman award in 1999. Okeke participated in five Grey Cup games and won the championship only once in 2002 when Montreal defeated the Edmonton Eskimos. 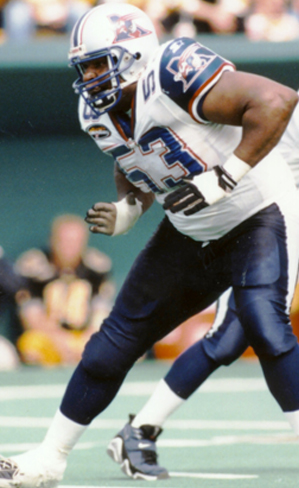