Peter Dalla Riva came to Canada from his native Italy in 1953, and was destined to become one of this country’s most popular athletes.

Dalla Riva played with the Burlington Braves and the Oakville Black Knights of the Canadian Junior Football League (CJFL) before joining the Montreal Alouettes.

Dalla Riva was Montreal’s leading receiver in 1970, 1972, 1975, 1976, and 1977, and he holds the club record for touchdown catches. The big Tight End often came up with clutch receptions and his tremendous blocking ability made him an important member of the great Montreal teams of the 1970’s.

Peter Dalla Riva’s jersey #74 was retired by the Montreal Alouettes on October 24, 1981. 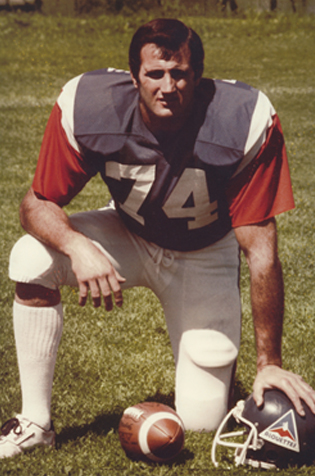