Larry Highbaugh began his CFL career in 1971 as a Defensive Back for the BC Lions. He played 22 games with BC before signing with the Edmonton Eskimos partway through the 1972 season.

Throughout his amazing career with the Eskimos, Highbaugh lead in many statistical categories. One of his records was a 118-yard kickoff return on October 17th, 1976. This was the second longest kickoff return in regular season play.

At the time of his retirement, Highbaugh was second in CFL history for most interceptions all-time in the regular season with 66 interceptions.

Highbaugh won numerous awards and honours throughout his 14-year cfl career including being named All-Canadian three times. He played in nine Grey Cup games and he was on the winning end six times. Highbaugh was part of the great Eskimos dynasty from 1978 to 1982.

He has been honoured on the Eskimos Wall of Honour and is a member of the Alberta Sports Hall of Fame. 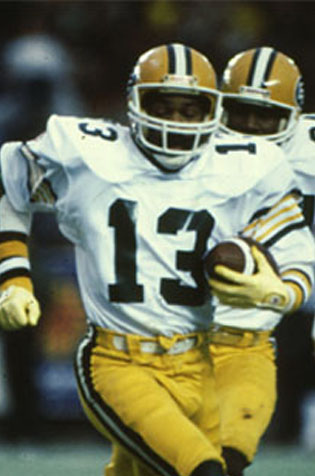