James Murphy attended Utah State College where he established himself as the second leading receiver in U.S. College Football in his senior year.

He was drafted by the Minnesota Vikings in 1981, but after being cut, joined the Kansas City Chiefs where he performed as their primary kickoff returned, averaging over 22 yards per kick.

In late 1982, Murphy joined the Winnipeg Blue Bombers, where he played eight seasons with the club and established himself as Winnipeg’s all-time leading receiver. The 1986 season proved to be Murphy’s career year. He set two club records including 166 receptions for 1,746 yards and most yards gained receiving for 9,036 yards. During 1988, Murphy gained over 1,400 yards pass receiving and scored 10 touchdowns. On October 16, 1988, he set another Blue Bombers record with 7 receptions for 229 yards and scored 2 touchdowns.

Murphy was inducted to the Winnipeg Football Club Hall of Fame in 1995. 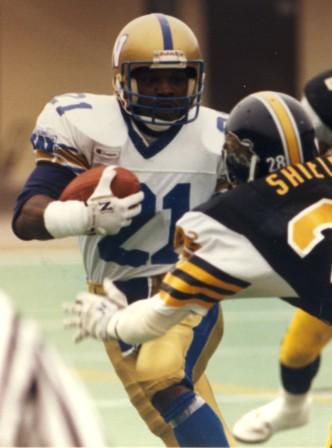