Bobby Jurasin attended Northern Michigan University. He joined the Saskatchewan Roughriders as a free agent in 1986 and despite playing only eight games, he was nominated as the team’s Most Outstanding Rookie. Over the next 12 years he continued earning laurels for his performances at defensive end, making him one of the Roughriders’ all-time most popular players.

In 1987, he played all 18 games recording 4 defensive tackles and a team record 22 sacks. He was nominated as Saskatchewan’s outstanding defensive player, an honour he would also earn following the 1996 and 1997 seasons. In 1989 Jurasin’s all-star contributions helped the Roughriders win their second Grey Cup in franchise history by beating the Hamilton Tiger-Cats 43-40 in what some consider the greatest Grey Cup game ever played.

Often his coaches switched him from rush end to weak side end and inserted him on the Roughriders’ short yardage offence. Jurasin was named All-Western six times and All-Canadian four times. He finished his CFL career in 1998 playing for the Toronto Argonauts.

When he retired in 1998, Jurasin was third among CFL sack leaders with 142.

In 2002, Bobby Jurasin was inducted into the Saskatchewan Roughriders’ Plaza of Honour. 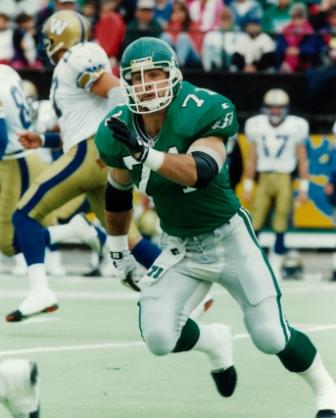