History of the Grey Cup 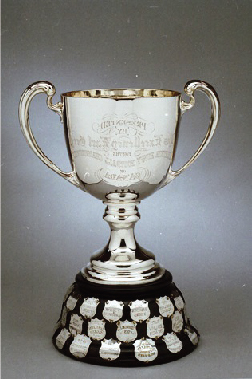 1st Base of the Grey Cup

The Grey Cup, today a trophy for Canadian professional football supremacy, was originally not a pro award and actually was not intended for football at all!

In 1909 the Grey Cup was contemplated as an award for the amateur senior hockey championship of Canada. However, Sir H. Montagu Allan stepped in and offered a trophy, the Allan Cup, for hockey competition. This made the trophy donated by His Excellency Earl Grey, the Governor General of Canada, and an award for the amateur rugby football championship of Canada.

Having decided to offer the trophy, the Governor General promptly forgot about his promise and the cup was not ready to present to the first senior Dominion Champions, the University of Toronto, in December 1909. Two weeks prior to the championship game, a series of letters was exchanged and a hurried order placed with the silversmiths to produce a sterling silver cup, on a wooden base, total cost: $48.00. Three months later, in March 1910, the Grey Cup was presented to the University of Toronto.

In 1909 all football in Canada was amateur and was governed by the Canadian Rugby Union. All of the Unions, or football leagues, who played under them and were members in good standing, were eligible to compete for the Grey Cup. Teams in Quebec and Ontario were the sole competitors until 1921, when teams from the west also entered the competition. Determining the champion was a very involved process since so many organizations were involved and many played by different rules. An elaborate series of “playdowns” was scheduled which involved the Intercollegiate Union, the Interprovincial Union, the Ontario Union and then, if they decided to travel east for the contest, the champion of the senior western provincial unions. 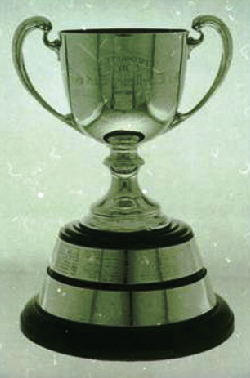 2nd Base of the Grey Cup

Champions of an organization did not always choose to compete for the trophy. It was common for a University team, especially McGill in Montreal, to determine that the final game interfered with the players’ studies and so they would not compete.

After 1921, when teams from western Canada became eligible for competition, circumstances occasionally arose which prevented them from traveling east for the championship. (The championship game was always held in the east until 1955.) Sometimes the weather prevented the trip, or the playdowns in the east took too long and it just wasn’t feasible to make the journey so late in the year.

In 1924 the Winnipeg Victorias became embroiled in a massive dispute which eventually prevented them from competing. They could not agree which railway to travel on; the players favoured CNR and the club executive chose CPR. The feud dragged on until the executive determined that the team would forego the contest. The players decided to go anyway, and the executive informed them that they would not be allowed to use the team name. By the time the problem was sorted out, it was too late in the year to go anyway.

Even when teams did travel east, there were sometimes difficulties. The first Western team to win the Grey Cup was the Winnipegs in 1935. When it came time for them to check out of their hotel in Hamilton, they found that they did not have enough cash to pay the bill. Les Isard, a club executive, came to the rescue.

As some Unions became more professional, the Intercollegiate Union felt they were playing at a disadvantage, and ceased to challenge for the trophy. In both the west and the east, the Interprovincial Unions became the strongest, and eventually evolved into the western and eastern divisions of the Canadian Football League in the 1950’s. 1945 was the last game played only by Canadians and since 1954 only the teams in the CFL have competed for the trophy.

The Grey Cup celebration as we know it began in 1948 when the Calgary Stampeders went to Toronto to play the Ottawa Rough Riders.
The Westerners, dressed up in ten-gallon hats, high boots and spurs, invaded the city with horses and chuckwagons and impromptu parades. Hotels cleared their lobbies of everything that was not nailed down and good-natured hijinks were the order of the day. 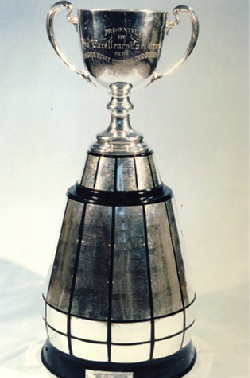 3rd Base of the Grey Cup

In 1993 the CFL entered a new era when it expanded into the United States, accepting the Sacramento Gold Miners into the League. The following year three more United States teams were awarded franchises. The Baltimore Football Club, despite much controversy over the team name, played in the Grey Cup championship game in their inaugural year. Head Coach Don Matthews, a wily CFL veteran, recruited an outstanding group of players, many with Canadian experience. The club narrowly lost to the B.C. Lions in the 1994 championship.

In 1995 teams from Birmingham and Memphis entered the league, the Sacramento club moved to San Antonio and Las Vegas suspended operations. Baltimore became the “Stallions” and once again went to the Grey Cup championship. This time they won, defeating the Calgary Stampeders 37-20 and for the first time the Grey Cup trophy went south. Another milestone was realized in 1995 when Regina, Saskatchewan hosted the championship game for the very first time.

4th Base of the Grey Cup

Introduced in June of 2019, after two years of design concepts the Canadian Football Hall of Fame researched all the names presently on the Trophy by going into game rosters, we made spelling corrections and darkened the names to make them legible for the fans to read. We also made the name plates interchangeable so that the size of the Trophy will never change going forward. The history of the Trophy in some cases will remain the same as the War Year’s plate, 1942 and 1944 plates signifying the two years the trophy was won by the Canadian Military will remain. The plates that will be removed will be placed  in the Hall for display.

The previous Trophy introduced in 1987 is now retired and will remain in the Hall of Fame located on the fourth floor of Tim Hortons Field in Hamilton, and will be on display when the Hall tours Canada .